It’s not often I make it on the racecourse as an athlete and competitor, but over the past few years a pressure has been boiling up inside me and finally burst. I had to get back in the game. Year after year of watching the affectionately known MOCR, Miami World Cup, from the sidelines I decided last January that I had to do the event this year.

This year’s event being the first of a two part qualifier for the 2016 Olympic Games in Rio I embraced a “what the hell” kind of attitude as I clicked to pay my registration for the event. Last weekend, during the MLK holiday, the RS:X MidWinter’s Regatta was held as a “test event” for the carnival of chaos that is about to ensue in the Biscayne Bay this upcoming week. 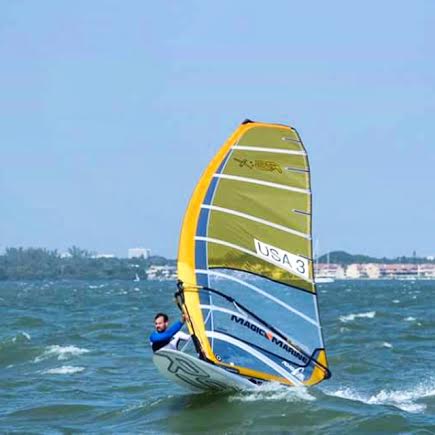 The three days of racing was a perfect prep-event. Saturday was windless, I mean, maybe 4 knots–a totally exhausting pumpfest that kept my heart rate jacked to 180 for what seemed like for-freaking-ever. (After the first race, I shared my exhaustion with 2008 Olympian and longtime buddy, Ben Barger. He laughed and reminded me that “during OCR they’ll run that for 45 minutes.”)

Sunday was maybe the best day of sailing of my life. And by that I mean the most extreme and terrifying and fastest. The RC boat recorded gusts up to 38, yes thirty-eight, during the first race. I’ve never seen the Bay so wavy, with 3ft steep chop rolling down in quick succession. We ran three races, with most of the fleet back on shore because of broken gear or fear of. The second race I was leading the pack coming out of the bottom rounding and focused on getting back up to the top. Halfway up the beat I realized everyone was stopping at the finish line. The race was one lap. I was doing two. First to last just like that. Ha! So I finished the full second lap and chocked it up to practice.

Monday, mixed conditions: windy in morning dead by the last race. So tough to sail in this marginal, patchy breeze. But an amazing exercise in connecting the dots and not over-sailing the course, definitely a physical chess match on the course.

My brother Nic came down to coach me on the water during this event and sitting with him on the coach boat I experienced a compete role reversal. To receive sound bites of coaching I give out to my sailors in between gulps of water and energy bars, was very informative. Here are some of my big lessons from last weekend.

Like I said, Nic was coaching me in rote: “Get a good start. Look for the first shift. Consolidate the fleet. Protect the favored side. .” All excellent advice, given the circumstances on the course. While racing, I can even hear myself chanting these axioms of sailing.

This is the same type of coaching I would give a 10 year old Opti kid. Is it crazy that I would need the same advice while prepping for one of the most competitive regattas on tour? Absolutely. Because there are basic fundamental characteristics of putting together a successful race. They are called fundamentals for a reason (ugh, it hurts just to write something so trite) But it’s true. This is the connective tissue that pulls a good race together, without it you are racing too much against yourself and not enough against the fleet.

GET YOUR HEAD OUT OF THE BOAT

So I did an extra lap, big deal. HUGE DEAL. First to last in a snap, not to mention I lost out on a ton of recovery time between races. It is damn hard to make decisions and think clearly when your burning calories like they’re drops of water on the stove. But take a breath, try and look at the big picture. And for the love of pete, check the course board on the back of the RC boat.

Racing the RS:X is hard. It requires a lot of effort and fitness. Along with all the other experience and technical knowledge any craft demands. All in All, I’m just happy to be out there on the racecourse and glad to have been able to take the time away from work to compete. I know at the end of the event this year, I won’t be faced with the regret of missing another one. But most likely the shredded hands and throbbing ache of accomplishment. I can’t wait.

An ocean of thanks to Adventure Sports USA and MAGIC MARINE for supporting me this event. Please stay tuned on all the action in Miami World Cup this week. Thanks to my friend, Osvaldo Zamora for capturing some of the moments above.

One thought on “Been A Longtime Coming, Miami”